Foul weather is CX weather. And this day’s cold, rain, and snow brought out over 700 racers to the Marymount Event Center south of Tacoma for race #5 in the MFG Cyclocross 2017 season. It was a nasty day – muddy and cold, indeed a true ‘crosser’s Holy Grail. The waiting through early fall is over for those eager for selfies with muddy faces and kits spattered head to toe straddling mud-covered bikes.

By the midday’s races, the view across the field was partially hidden by curtains of falling snow. But out there could be seen tiny children with parents in pursuit, youth racers, and adults well into their 60’s. As if in a Tchaikovsky’s Nutcracker ballet, cyclists were twirling round and round around in the snow and mud, some not so elegantly. And, yeah, smiling.

What are these people thinking?

This “North 40 CX” course, named after an old homesteader’s north 40 acres, featured a long flat grassy field with two muddy and boulder run-ups and two fast downhill legs at opposite ends of the course. Many riders dismounting to climb these hills where breathless, hitting the wall short of oxygen, and succumbing to short-stepping, while others were desperate to leap around them and remount at the top.

The two descents challenged braking skills, pitting die-hard cantilever folks against the converts to disc brakes. With such a build-up of mud and dirt on rims before the descents and hammering the brakes, possibly a few more went home as converts. Atop the hills, the course meandered through woods and after landing back down on the flats continued with grassy twists and turns. As is characteristic in CX, these flat turns became increasingly muddy over the day from rain and snow, causing more sideways wipeouts as the day progressed. Even some elite riders were not exempt. And these afternoon riders were more generously decorated by the terra and best in show for the selfies.

The elite races welcomed a few new faces to the podium after the racers battled through the well-worn lines and slushy mud. The Women’s Cat 1/2 showcased the friendly rivalry between Monica Lloyd (Olympia Orthopaedic Associates/CBC Racing) and Gina Estep (Team Thrive p/b Kaiser Permanente), but not at the get-go. That limelight was all Natasha Cowie’s (Steed Cycles), eking out a first lap win from Lloyd. But after Estep popped into first in the second lap, the tight group of three was controlled by Lloyd and Estep.

Chatting afterwards, Lloyd explained that she was hoping the men would lap them to provide her with a possible lift, one of her successful strategies. And though they didn’t, her opening came in the third to final lap when she spied Estep struggling on the final run-up hill. Estep explained that she was “digging deep,” but simply could not keep up with Lloyd as she passed. In the end, Lloyd took the top of the podium, with Estep in second, Cowie third.

Men’s Cat 1/2 provided its best drama in the first lap. Spenser Paxson (Kona) had the hole shot and felt good about his lead, until he dropped his chain while running over the barriers, not even a third of the way through the course. He dropped from first to dead last. With the confidence of a seasoned winner, Paxson stayed calm and navigated his way through the slower field, clawing back to first position by the third lap, where he dominated through the rest of the race. Parker Bloom (Broad Street Cycles) gave a good chase, closing in on Paxson to secure second place only 11 seconds behind. Stirling Quinn (Ravenna Capital Management) enjoyed his temporary lead while Paxson struggled behind with his mechanical, but soon Paxon and Bloom were breathing down Quinn’s back. Quinn dropped to third, but held on masterfully not allowing much gap to form. When the cold and wet battle came to an end, Paxson won, with Bloom and Quinn in second and third.

So, which makes better mud, snow or rain? Yes.

The event’s lead sponsor was The Athletic Community, the Portland-based maker of super comfortable socks and other top-notch sportswear, https://www.theathleticcommunity.com/.

And many thanks to the Marymount Event Center, host of the venue. It is also a public museum boasting a collection of over 500 vintage cars, trucks, motorcycles and other odd vehicles, part of their larger collection, the finest of which are on display at Tacoma’s LeMay America’s Car Museum. https://www.lemaymarymount.org/.

Also, many thanks to the food vendors, first aid, and our bike techs (to whom this author owes “grats”).

Next up – The famous and beloved Woodland Park GP P/B Sub Pop on Sunday, November 19th, 2017. Join us all there to close out the season. 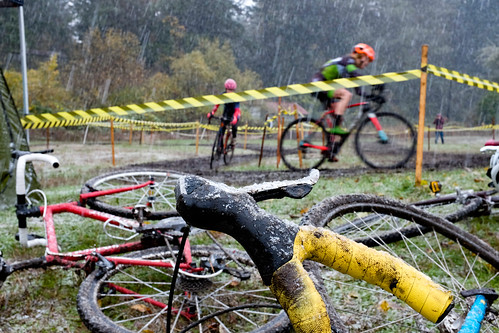