Season eight of MFG Cyclocross got underway this weekend, kicking things off with Lake Sammamish GP. Thirty minutes outside the city, racers faced a fast course that was notably different than years past. The sand that so often robs one of not only their power, but also their will to ride—and in the worst cases, run with their bikes—was absent. The flat, and at times bumpy course was a power rider’s dream, allowing for fast lap times, as close groups of riders tackled the course.

The final podiums of the day received “The Treatment”, a bevy of prizes for the top three in the Men’s SS, Master Men’s 1/2 (45+), and Master Men’s 1/2 (35+). In the single speed race in was Bryan Myers (Hodal!) who stood on the tallest step with Brad Nelson and David Chipchase (SCAA/Starbucks ) finishing second and third respectively. Steve Westover (Diamondback) took the honors in the Category 1/2 35+ and Craig Undem (Cycle U) stood tallest in the Master’s 45 + 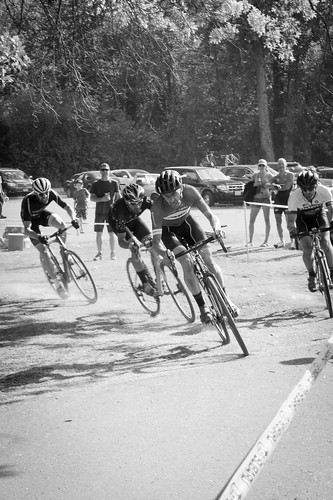 A rejiggered schedule had put the category one – two races in the middle of the day, where crowds gathered in pockets throughout the course. Both the men’s and women’s races were run in the same time slot with no other categories, reducing the amount of lapped traffic for the racers to contend with. There were still lapped riders however and they would prove decisive.

In the women’s race, Monument Wheelworks Tricia Fleischer and 333Fab Factory team rider Heidi Wood quickly separated themselves from the pack of riders. A group of three riders led by Kenda Super (Hagens Berman/ Society Consulting) set to a fruitless chase. Wood and Fleischer traded leads for the first half of the race. Fleischer made her move near the thirty minute mark with a strong attack, leaving Wood to a solo chase. Fleischer eventually crossed the line with thirty seconds in hand over Wood. Bicycle Centers’ Hillary King eventually separated herself from Super to finish third. 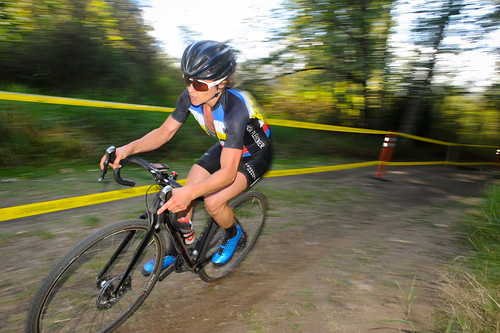 The men’s race saw a group of men quickly separate themselves. The group, including last year’s usual suspects Scott Funston (RAD Racing) and Steve Fisher (McGovern Cycles – FSA CX). The group contained five riders, each taking a turn at the front as they sped along the course. It took some time, but slowly the group was whittled down to Fisher and Stephen Ettinger (Ride Bike Alliance p/b Focus Bikes). Ettinger made his move in the final lap as he and Fisher wound their way through lapped traffic. Ettinger crossed the line first, besting Fisher by a couple of seconds. Qarv Imports/Evoc’s Hector Fernando Riveros Paez finished on the podium’s third step. 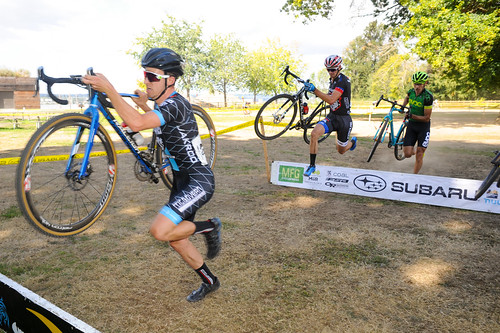 Stop number two of the 2016 season comes in two weeks (9/25) when the series will return to Marymoor Park after a one year hiatus. Those who brave the early races will receive “The Treatment”.