Round three of 2015 MFG Series, along with 730 racers, arrived at, Everett’s Thornton A. Sullivan park, for a technically demanding course on the shores of Silver Lake, that this year, went by the name The Brian Tracy Experience in honor of—you guessed it—Brian Tracy, a racer and friend of MFG Cyclocross, who is currently battling cancer. Mr. Tracy was among the spectators, set up at the end of the second sand pits, where the course was marked in a green tape bearing his visage with the words “Be Positive”, which is how Brian has approached his diagnosis from day one.

This year the Brian Tracy Experience was two trips across the beach, climbs thick with grass and several descents that were, loose, dusty and, at times steep. To succeed on this course one needed legs that can survive being repeatedly abused by the punchy climbs and the ability to keep their handling skills sharp as they attempted to get their heart rates back down below the red. And that was before the sand. Those that had a hard time managing those skills were spurred on by small cheering squads peppered throughout the spectator friendly course.

In woman’s race it was Kristen Kelsey (Axiom HVAC/Cycle U North) who managed those skills better than the rest, after coming to the front midway through the race. At the start of the race it was Nemesis Racing’s Andi Zolton who took control early, working through the tricky course free of any traffic, while Ten Speed Hero’s Tricia Fleischer and Kelsey chased. Soon Zolton began to fade, and was passed by the two chasing women. Kelsey was hard to match on a course that she has dominated in years past. Fleischer followed in second, with Zolton—who suffered a crash—followed some twenty-five seconds behind.

The men’s race saw the return of Russell Stevenson (Trek CX Collective), who brought a fight to Raleigh/FSA CX’s Steve Fisher. The pair kept each other close throughout the technical course, with Fisher leading for the majority of the race. Fisher and Stevenson may have been battling it out at the front, but it was Aaron Bradford, who animated the crowd. Bradford, who was racing on single speed, chased, caught, and then blew by the pair, late in the race. He was able to hold that gap for half a lap, until Stevenson attacked Fisher, who suffered an untimely flat just after passing the pit. Stevenson was able to bridge, and then pass Bradford, as he navigated the course tricky descents, while Fisher pitted for a new bike. At the end of the day it was Stevenson who was victorious, coming across the line with enough time to sit up celebrate. Bradford came in eight seconds down, and Fisher finished a comfortable third.

MFG takes another bye week this coming weekend, and then comes back within Seattle city limits for Magnuson Park CX, a fast course on the shores of Lake Washington. Fisher is comfortably first in the series standings with 86 points, his closest competitor, Cascadia Bicycling Team’s Kelly Nowles, is twenty two points down on Fisher. In the women’s race it is Kelsey with the points lead, but 333Fab CX team rider Heidi Woods is only six points down, with Andi Zolton another seven points back on Woods. Halfway through the series and the women’s race is still up for grabs. 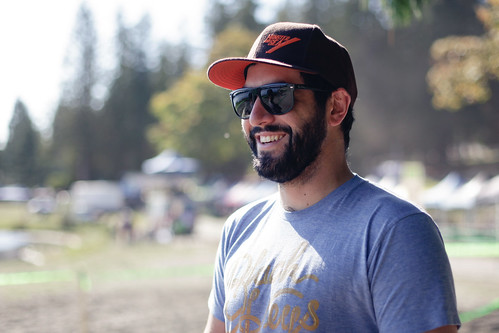 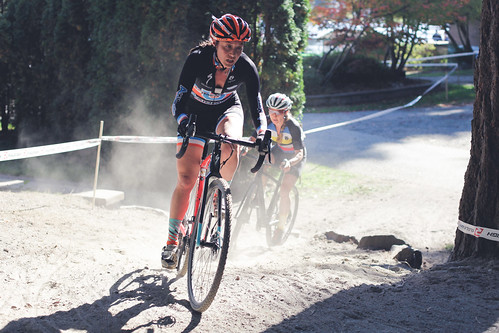 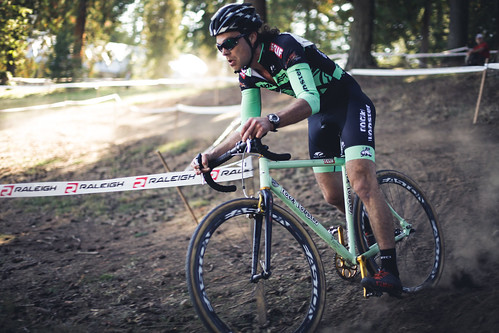 Aaron Bradford animated the race on his Single Speed. (photo by Derek Blagg) 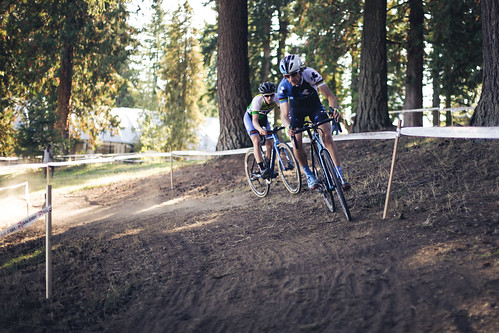