The penultimate stop of the 2016 MFG season rolled south to Tacoma and the grounds of the LeMay Family collection. Racers weaved their way through a greasy course that featured two run-ups, followed by fast descents, and bone yard of old trucks and buses that pepper the grounds of the auto museum. Predicted rains arrived early making the course slick, and causing more than a few crashes. 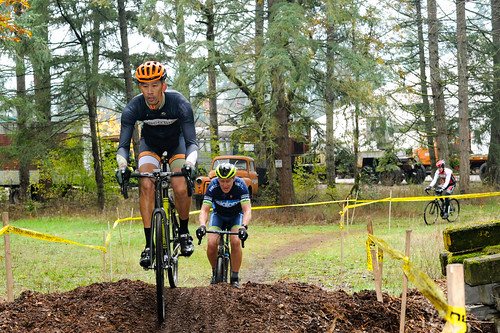 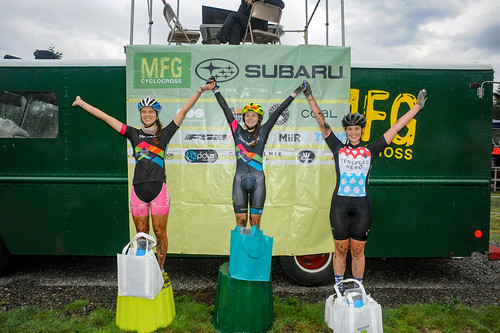 In the women’s race Tricia Fleischer (Monument Wheel Works) continued her dominance, sealing up the series overall. For the first three laps Fleischer had company, with Gina Estep (Group Health) and Janna Gillick (Coal City Cycles) accompanying the series leader, through the course’s twists and turns. Fleischer would finish the hour with a little under a minute lead on Estep, while Gillick held on for third. 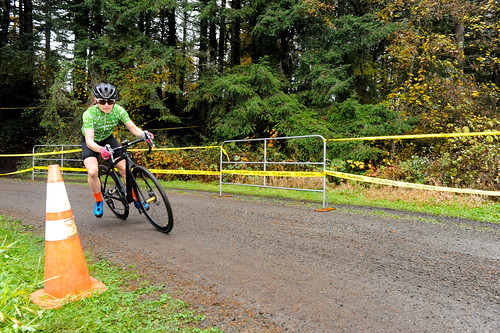 The men’s race featured a back forth between Hector Fernando Riveros Paez (Qarvi Imports/ Evoc USA) and Kona Cycles Spenser Paxson. At times, the two ripped through the course on each other’s wheel. Riveros managed to distance Paxson twice, but crashed multiple times on the slick course, giving Paxson a chance to catch up. “I’m a skinny guy and I struggle on the flats, so I would attack in the technical sections.” Riveros said. One of those well-timed attacks allowed Riveros a small lead, giving him the win by two seconds. Behind the pair, Mcgovern Cycles/ FSA CX rider Steve Fisher was possessed, and riding out of skin to catch on. Fisher suffered a broken chain at the start of the race, and somehow, made it to the pit and was more than a minute back on the first lap. Instead of calling it a day, Fisher rode through the Women’s field—which had started thirty seconds after the men—and then, over the course of the hour, rode his way through the men’s field, systematically passing riders in corners, powering past them on the flat straightaways, and by riding at least one of the course’s run ups. Fisher eventually finished third, close to two and half minutes behind Riveros and Paxson. 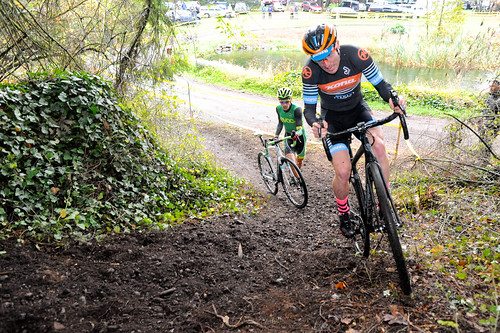 The final stop of the 2016 MFG Cyclocross season slides into the heart of NE Seattle: Woodland Park. Tricia Fleischer holds a twenty-point lead over second place Monica Lloyd in the series standing, Kenda Super (Hagens Berman Society Consulting) is currently third. The Men’s race is still wide open, where Rory Jack (Recycled Cycles) has used a consistent season to put him ahead of Riveros by one point in the series standing, with Steve Fisher a good ride away from second place for the year.