Despite what the calendar says, summer is hanging on tight in Northwest, and this past Sunday a mass of racers returned to King County’s Marymoor Park in Redmond, Washington for laps in and around The Jerry Baker Memorial Velodrome for the second stop of the 2016 MFG Series. Racers took to a dusty course seemingly riddled with potholes. The dust and the bumps was shown on the racers bodies: dirt smeared faces and blistered hands. The conditions also cause more than a few race defining crashes. 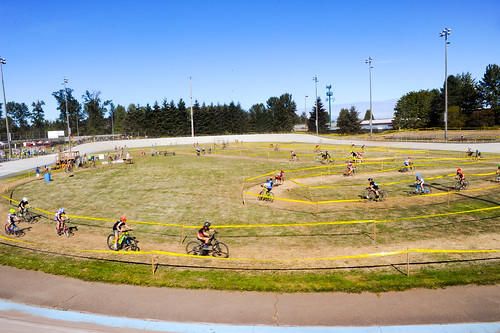 This week those hearty enough to race the early slot received “The Treatment”, with those who landed on the podium going home with prizes for their efforts. The winner of the Men’s Cat 4 race was William Courtney, Ricky Lyman, and Adrian Magun, finishing second and third. In the Men’s Cat 4 35 + race it was Christopher Nelson who finished on top and Thomas Horan (Mcleod Construction/ Snohomish Bike Racing) and Damon Gjording finishing second and third respectively. The men’s 55+ podium was Paul Lastayo (Kuhl), Roy Colven, and Taco Time’s Rodney Brandon. 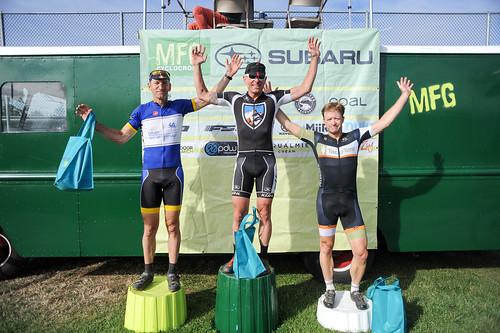 In the women’s race a recently “retired” Jess Culter (she raced the Wednesday’s Cross Vegas World Cup race) put her wheels to the line along with series leader Tricia Fleischer (Monument Wheel Works) and thirteen other women. Fleischer took the early lead, with Cutler—who was representing her newly formed NWCX Project—close on her wheel. The two women quickly worked a big gap over their pursuers. “I only pre-rode half the course, so I let Tricia set the pace and I planned to attack on the third lap.” Cutler said. She was handed her opportunity when Fleischer crashed as the pair went into the course’s long start/ finish straight. “I was playing dare with the tape a little too much.” Fleischer hit her head, keeping her on the ground for close to a minute. She eventually got up, and kept riding, managing to keep her two chasers (Cutler’s teammate/protégé Shannon Mallory and Bicycle Center’s Hillary King) at bay to finish second. King bested Mallory to land on the podium’s final step. 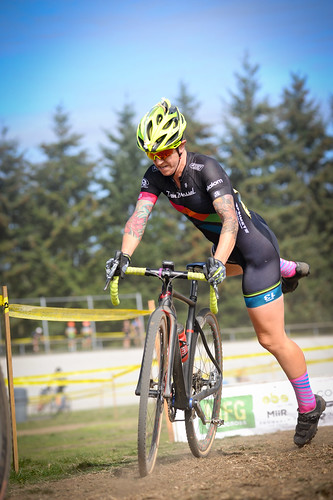 In the men’s race it was Stephen Ettinger (Ride biker Alliance p/b Focus) and Hector Fernando Riveros (Qarvi Imports/Raleigh Bikes) who got the jump on their competitors. The pair got away early, leaving Trek CXC rider Russel Stevenson to chase. Ettinger lead Riveros through the technical course, weaving a serpentine path through, and round the velodrome. Soon, Riveros would bobble, and Ettinger would take the opportunity to attack. Ettinger crossed the line with just under a minute in hand over Riveros. Joseph Maloney of B&L Bicycle/Trek finished third on the day. 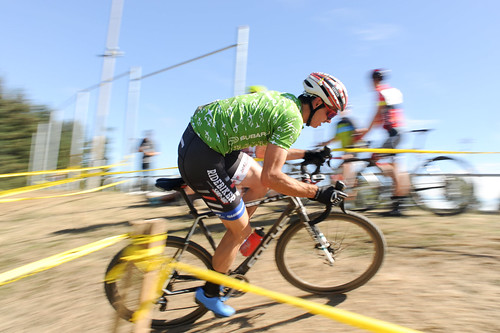 Next week MFG Cyclocross returns to Silver Lake Park in Everett for the Kate Blincoe Prestige. The race is in honors Kate, who was a Pacific Northwest powerhouse and won the inaugural Super Cup, the US’s first national cyclocross series. The 11:10am races will receive “The Treatment”, with prizes going to the top three in each category.