Cyclocross in the NW is now in full swing, evidenced by the nearly 900 riders who showed up for MFG’s race #2 September 24, 2017 at Marymoor Park in Redmond, Washington, on the grounds surrounding the Jerry Baker Velodrome. Cross warriors committed their minds and bodies to dig deep and battle around every other rider, clawing to the finish line. Some went for cash or prizes, some for treats including those hanging off fishing poles emerging from tents. All came for fun and challenge around this this bumpy, gritty course. Coal Headwear sponsored this race, named Moor Cross.

The elite racers were only a fraction of the field, yet naturally captivated spectators with their skilled pursuits.

The Cat 1/2 Men was won by NW’s Steve Fisher (McGovern Cycles/FSA CX), his second win in this season’s MFG series. Following Fisher across the finish line was Spencer Paxson – 2nd, (Kona) and Stephen Ettinger -3rd (Focus/Shimano). This matched the final results of MFG Race #1. But spectators were kept wondering who’d win, because Fisher drifted between second and fifth place for nine laps. The leaders had formed a pack with Kevin Bradford-Parish – 4th (Gillespie Eye Care/SET Coaching/Arlberg) that hung together and pulled away from the rest of the field, beginning with the first of 10 laps. The finish was a short, standing on the pedals sprint, with Paxson only a bike length behind Fisher.

The Cat 1/2 Women race began with Hillary King (Bicycle Centres) assertively taking the first position at the start and through the lead lap. For the next eight laps, along with Monica Lloyd (Olympia Orthopedic Associates), Gina Estep (Group Health) and Kelly Jones (Steed Cycles), four racers gave spectators a good show as they kept trading the lead while they stretched away from all other racers. Estep stayed with the group even though she suffered a crash and dropped chain mid-race.

But in the final lap, it clearly became a race between Lloyd and Estep, with Lloyd clinching it by a tenth of a second, and King and Jones crossing the finish line within a minute. Lloyd shared with us that in the last lap, out in what was referred to as “uncharted waters”, she was able to hop onto a train of Cat 1/2 men as they passed by to get a little lift. Estep stayed close behind, taking second place ten seconds behind Lloyd.

Many familiar with this course regard it as a, “teeth rattler”, lumpy hard earth, and dusty at times, especially behind the large field starts. The dry grassy shoulders around the velodrome provided the greatest technical challenges, with tight descents and tricky bottom turns. Some racers gracefully tight-roped along the concrete edges, off-and-on the grassy spine, only to find themselves driven down an off-camber slope with hairpin turn thrown in half way down. The lucky could gingerly negotiate the turn while others had to jog around or fall with racers sliding out before them. Not so for the elites who showed up the rest by brake-skidding through the turn like racecar drivers, somehow maintaining momentum after a 180. Leading up to the finish line were wiggle-waggles that allowed skilled riders to maneuver into better position before pounding the pedals through the finish line.

The race welcomed riders of all shapes and sizes, ages and abilities.  The largest age group represented was the 45+, with their children filling the Junior starts. Parent paparazzi charged along a second wave after each junior start. Truly fun for the entire family.

It’s a short turn-around for MFG Cyclocross with Tall Tyler CX Celebration coming this Saturday at Thorton A. Sullivan Park in Everett, WA. The course on the shores of Silver Lake is regarded as one of the toughest in the region with three rugged climbs, two passes of the sand and one rider choice run/ride sector. 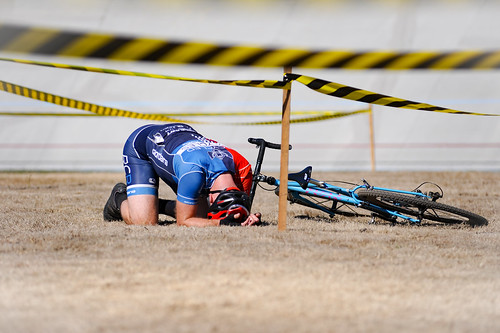 Yeah, it was hard. But good hard. 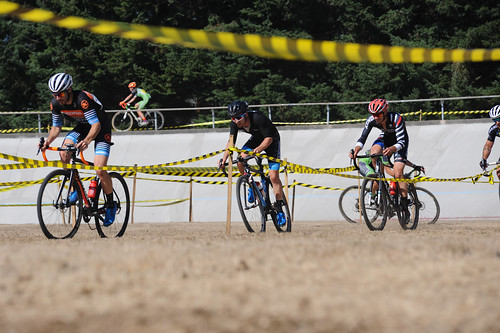 Paxson, Fisher and Ettinger on the front. 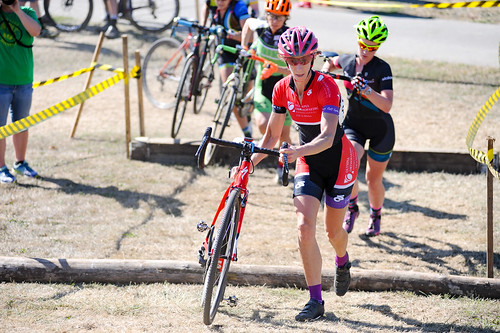 Lloyd before riding away with Estep. 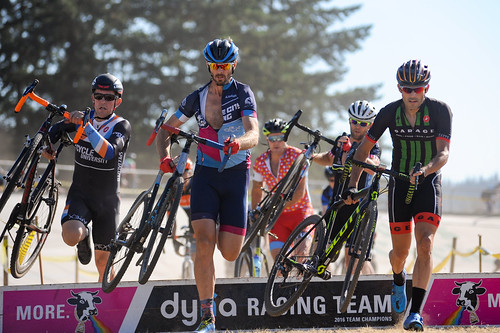 Cat 1/2 Men 45+ has been super entertaining for spectators.