By Nina and Robert Milligan

It was attack after attack, racers taking down one after another, in this last-of-season MFG ‘cross Games. This was at Woodland Park, beside the world-famous Zoo. This venue is of one of the NW cyclocross community’s most popular venues for racers and spectators alike. It features a big forest with rolling hills, which provided the perfect Games battlefield: the tree canopy dimmed the light; fallen leaves and pine needles left a carpeted forest floor, making well-timed passes undetectable; a silent “swish” and then a gentle whirl of leaves as one rider took out another, then another. Some never knew what happened to them. The best weapon of the day was timing when passing.

Today’s course traveled a circuitous loop though the park’s lovely forest, with run-ups, log jumps, installed barriers, and a series of three deceptively gentle hills that rearranged the rider lineup, just before a downhill to a 90-degree bottom turn at a classic local CX spectacle, Hodala! Corner. This one provided an optional course detour where allegiance, treachery and abandon happened simultaneously. Hodala!’s contribution to the Games consisted of a giant bubble machine and slip-n-slide,  tent-side service of non-FDA approved food and beverage hand-ups, billowing campfire smoke, all accompanied by various loud noises. Several elite men and women risked their leader positions and maybe reputations by taking the “shortcut”. The other less-observed section of the course was the finish, over a paved section, where sprints made the difference for many, and the audience cheering for all.

As the season finale, this race closed the MFG Cyclocross season rankings. In the men’s category 1/2 race, it was leader Steve Fisher’s (McGovern Cycles / FSA CX) season to lose. At the starting line, he led by only four points over Spenser Paxson (Kona). Each race win adds only a two-point gap per position, so for Paxon to take the title, he would not only have to win today, but Fisher would have to drop to third place. Paxson had won only one race this season, the “North 40” on November 5th, which Fisher did not attend. Conversely, the only race Fisher lost this MFG Cyclocross season was to Russell Stevenson (Trek CXC) at MFG’s “Tall Tyler” on September 30th, winning after Fisher’s crash and mechanical. Paxon and Stevenson had this last chance to snatch the season away from Fisher.

Paxon took the lead on the opening tri-uphill climb with Fisher and Stevenson following along. The other racers strung along behind like spaghetti, a string that whipped around the course, sticking together (like our pasta) through the first two laps. But then Fisher, Paxson and Stevenson began to pull away with Kaler Marshall (road racer representing Canyon Cycles) hanging on. These four leaders established a wide enough lead to divert to the slip-n-slide at Hodala! Corner on the fourth lap, taking their bikes with them down the sudsy slide with the crowd going wild (wilder than usual). The chase group got a rise at this opportunity and kept their heads down, with Ian Tubbs (Audi) putting on the steam. But, it was insufficient to catch the now soaped-up leaders, who just, well, slipped away.

Marshall hung close with the podium leaders until the final lap, when he was reputedly taken out in an entanglement with another rider. In the exciting finish, Paxson roared through the finish eleven seconds ahead, with Fisher rolling over the line to take second, three seconds ahead of Stevenson, and winning the 2017 MFG Cyclocross Men’s Cat 1/2 series championship.

The women’s category 1/2 racers had Monica Lloyd (Olympia Orthopaedic Associates/CBC Racing) arriving at the Games with a solid hold on the series title. But series be damned, this race was all about Heidi Franz (NWCX Project). Trisha Fleisher (Monument Wheelworks/Jenkins Imaging) claimed the holeshot, but then Franz snatched the lead in the first lap and dominated the entire race, growing her lead ultimately to finish by more than a minute over second place. Franz was seen only once in the 2017 MFG Cyclocross series, at the first race at Lake Sammamish. She spent most of her 2017 ‘cross season gaining UCI points and grabbing a few wins at major races. Franz is also known for her road racing, taking a win as national collegiate champion for Seattle University.

The other races provided more drama. With Franz well out in front, the real battle was for second and third. Initially, Fleischer was hanging third on Lloyd’s wheel, but in the fifth lap Laura Jeddeloh (MD Endurance Coaching) jumped Fleisher to take Lloyd’s wheel, riding third. Jeddeloh then moved to second, but Lloyd would have none of that, yanking it back and not relinquishing, finishing a skinny second ahead of Jeddeloh’s third.

In other exciting races, going into the Woodland Park race, Liz Nettles (Team Thrive) held first place for the season, leading Mallory Nowels (Tenspeed Hero) by only two points in Women’s Cat 3. But Nowels squeaked out a win over Nettles by a split-second, knocking Nettles off the podium third place, closing the season in a tie.

In a similarly competitive situation, Men’s Cat 4 35+ began the day with only a two points gap between first and second, Christopher Quast (Yakima Basin Velo) and Mark Doane. But Doane closed out Quast by one second to win the race and tie for top spot for the season.

Big “Thanks” go out to today’s lead sponsor, home of many famous and talented musicians from the great NW, and the soundtracks for MFG Cyclocross’s outstanding playlist, Sub Pop Records https://www.subpop.com

And many thanks to the City of Seattle Parks Department for allowing the use of such a great venue. https://www.seattle.gov/parks/

Also, last and so essential, thanks to the loyal MFG Seattle food vendors (Here and There Grill, Tripod Coffee), first aid, and our bike techs.

Next up – The final event, the Series Awards Party at Brouwer’s Café November 27. 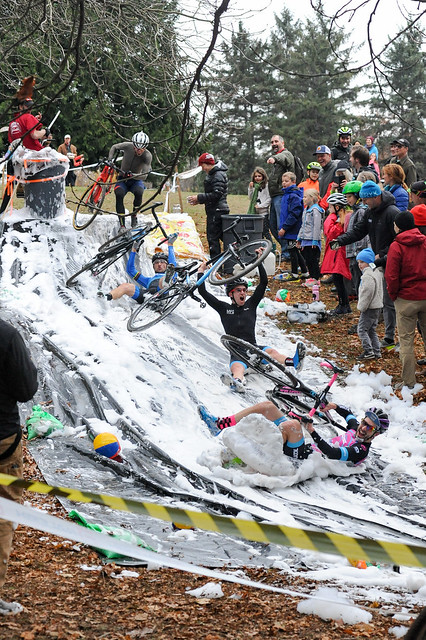